This is the episode you've been waiting for since the start of the Misha Montana's Alien Kitty Tattoo series. Misha makes a little rundown of what is about to happen in her genital area. She shows the design that she will get to the camera while waiting for the numbing cream to work on her pussy. The beautiful bombshell is both nervous and excited about the new tattoo. Without wasting any more time, let's now go straight to the tattoo session. The handsome tattoo artist masterfully applies the stencil on her pussy. Make sure to imprint the image of Misha's plain and smooth pussy because this will be the last time you see them. Even Ivan is shocked when he sees the stencil of the design on Misha's pussy. He jokingly says the shoot is over, but in all honesty, he loves the design. The numbing cream is doing its job as Misha can only feel a bit while the tattoo artist applies the stencil. While waiting for the stencil to be finished, Ivan and Misha take a quick walk down memory lane. It's time for the moment of truth! With the stencil now in the perfect shape, the tattoo artist readies his equipment for the pussy tattoo session. In this episode, witness as Misha tries to handle the sting of the needle as the tattoo artist works his magic on the left side of her pussy. The handsome stud decides to do the parts that are far from her pussy first, working his way to her sensitive pussy lips. Misha takes the intense sensation from the tattoo needle like a champ. With the calming help of Samantha Mack's huge tits on her head, Misha was able to brave through half of the tattoo session. The stunning babe takes a quick break to take a piss. Ivan follows her and shows his support for her. Don't miss the other half of Misha's tattoo session in the next episode to see the beauty of her completed pussy tattoo.

Misha Montana shows her healed up Alien Pussy Tattoo then rides the Tremor for the 1st time! Web Ser

Misha Montana preps for her finale of the Alien Tail Tattoo, Web Series Part 9 "The Reveal" 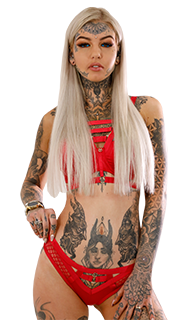